I’m just going to destroy any hope you have of me mentioning Lana Turner. I’m not a 75 year old man reminiscing about the good old times, okay? She’s not on the list (even though I will admit she’s a super babe). I have some fresh and modern Lana’s to dish out. So sit tight and shut up.

Lana Del Rey– Obvs I would start with this bombshell. She can do no wrong in my eyes. Granted, I’m supposed to be wearing glasses 24/7 and I’ll probably have a lazy eye by the time I’m 35, so I wouldn’t fully trust the judgement of my eyes, but I digress. Miss Del Rey is a bit of a meathead in the brain department, but she has perfectly pertinent lyrics and melodies that calm my worried soul. Her groovy music videos and velvety voice could melt anyone’s cold, grinchy heart.

Lana Tisdel– You’re probably like, who is this obscure Lana that Lily speaks of? No, she’s not some random girl I went to high school with, although that would be cool. She’s a character played by Chloe Sevigny in the movie Boys Don’t Cry. This movie resonated with me on so many levels. I went into a spiraling depression (and by “depression” I mean that I was kind of maybe upset for ten minutes) and made everyone around me partake in the disturbing topic. I even featured the film in one of my college Film Crit essays about female directors. Sorry, TMI. Anyway, Lana is one of the only characters in the movie that shows the qualities of what a kind and accepting person should be. Even though she’s surrounded by bad behavior and a dead end life, you can tell she’s optimistic and emits beauty in a somewhat dark place.

Lana Kane– Okay yes, this is another character from a show. Does anyone actually know a real person with the name Lana or is it just one of those names that writers make up? Lana Kane depicts the bad-ass side of Lana’s around the world. She’s one of the secret agents in the adult cartoon, Archer. If you haven’t watched this entire series, what have you been doing with your life? Lana tells it how it is and has no time for losers like you. Or me, for that matter. She has a rockin’ bod, a good sense of humor, and is relatively down to earth for someone who risks their life on a daily basis.

Lana Winters– Yet another fake Lana. But a good one. American Horror Story is one of my newest and best obsessions and Lana Winters appears in the second season as a hard-hitting news reporter trapped in a mental institution gone…well, mental. Her story line is perhaps the best and most chilling because she’s the typical tragic tale of someone trapped somewhere they shouldn’t be with no one that understands their situation. Basically a nightmare. But she ends up prevailing after a series of incredible feats and ends up doing something very human–becomes famous for her memoir and lets narcissism take over. Don’t worry, I couldn’t ruin this season if I tried. You should still give it a go. And Chloe Sevigny is in it too. So we have officially come full circle together. I love when that happens!

Who have you been crushin’ on lately?

After hearing the song, Video Games, by Miss Del Rey, I couldn’t help the urge to become obsessed with her. I went through the same kind of thing with Gaga, but she literally wore a dress made of meat, and after that point I really couldn’t deal. Let’s delve into some reasons why I love her. Hopefully this will make up for the post where I made fun of Adele and everyone hated me for like 5 minutes.

Lana Del Rey is a cool name, right? Yeah, too bad it’s not her real name. We can’t all be blessed with awesome names like mine. Lana’s real name is Elizabeth Woolridge Grant so can anyone really blame her for changing it? No. We support you Lana/Elizabeth. Although I would have made the ‘D’ in Del Rey lower case, but whatever.

Lana has some really crazy fingernails. I have to applaud her for never poking her eye out with one of those bad boys. They’re so long and pointy. Does she bleed every time she scratches herself? She must. What a brave soul. Inflicting pain on herself just to be cool and different. That’s probably something I would do. Beauty is pain after all.

Lana’s song Video Games is awesome. It’s so different from anything I’ve heard lately. Her voice is gravel-y, yet controlled and smooth. A walking contradiction, she is. The music video is self-made and pretty bomb. Other songs of hers that I enjoy are Born To Die and Blue Jeans. Here are some Born To Die lyrics:

Sometimes love is not enough and the road gets tough,

I don’t know why…

This is the last time,

Cause you and I, we were born to die.”

Mmm I love those lines. I mean, we’re all going to die eventually, so good for Lana for figuring out a way for everyone in the world to relate to her song.

There have been a lot of bad reviews on her Born To Die album though. Which is weird. In fact, there’s an online article with every awful thing that different magazines have said about her. Here’s an example: 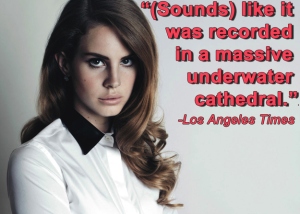 Yowch. But like, does anyone even read the Los Angeles Times? Does anyone even live in Los Angeles? Plus, I think recording an album in an underwater cathedral would be an amazing feat. So, she should take that as a compliment.

Also, her song Video Games was parodied to perfection into a song about The Hunger Games, appropriately titled, Hunger Games. Listen, if you don’t like Lana by now, here’s a picture of her holding a cat. Cat’s are awesome.