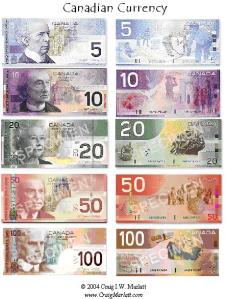 Notice that they have hockey players on their 5.

When Paul and I first started dating, I had so many questions about Canada. Questions like, “why does Canada exist?” and “what would possess you to live there?” But I was also interested in the fact that Canada, like most countries, has their own currency.

The Canadian dollar is very similar to the US dollar. They are doing slightly better than the US right now actually (grrrr). They also have quarters, dimes, nickels, pennies–everything is pretty much the same. However, there are some minor differences that I cannot seem to get over.

Firstly, Canadian money is like a fricking rainbow. I know the US just recently decided to add color to our money but it is really nothing compared to the Canadian monopoly money colors. Its pretty intense.

Lastly, they have a $1 coin and a $2 coin. Now, this is very similar to the British pound system. But there is a horrifying difference. On the Canadian $1 dollar coin there is a picture of a loon. Instead of referring to this coin as a ‘one’ or ‘one dollar’ they simply call it a “loonie”. When I found out this information I think I threw up in my mouth a little bit. To make matters MUCH worse, they refer to their $2 coin as a “toonie”. And to disgust everyone even more, I have actually started calling them that. What has become of me?

The scariest part of this whole thing is that I saw a dollar store in town and it was called The Loonie Bin. Gag fest. 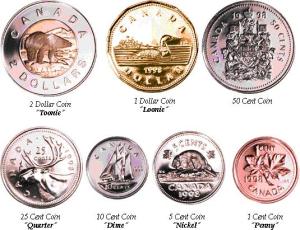 I'm still surprised when cashiers accept these as a form of payment.