I think we’ve all seen this kind of thing. Those people that go into a coffee shop with their books and/or laptop just to be seen studying or working hard. Don’t get me wrong, some people actually get work done in Starbucks. But why is a coffee shop your work environment of choice? Isn’t there a library or say, a quiet room in your house where you can study? No? Then here’s a simple solution, don’t study. Obviously the world doesn’t want you to. Why do you have to submit yourself to slaving away on a power point presentation in a crowded coffee house? 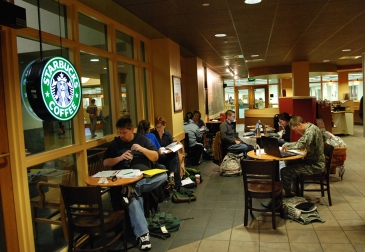 Hey! Look at that guy! He’s in the army AND studies at Starbucks. How quirky and unique.

The reason I bring this up is because I was at Dairy Queen just now and I saw a lady studying there. I mean, I gotta hand it to her, this was a pretty creative move. She can’t study at Starbucks at 9pm because they’re usually closed. So what’s the most popular place to go after 8pm? Duh. Dairy Queen. The place where you eat your feelings and they taste damn good. Mine tasted like a Reese’s blizzard if you have to know. Anyway, this lady had a booth to herself with all of her work spread out around her. It looked like she was in the zone. Maybe Dairy Queen is the new Starbucks?

I hate the type of people that look around the room as they open their Apple laptop up as if they were saying, “someone please notice me.” They might try to engage in a conversation with some randomer in hopes that they ask them what they’re working on. “Oh, I’m just working on the final draft of my screenplay.” I usually mime shooting myself in the face after I overhear one of those conversations. I just hate when people use the word “screenplay”. Just call it a movie.

I totally understand if there are distractions in your house, or if your parents beat you and you can’t possibly study at home. That’s fine. But just go to a school or a library. Coffee shops are so loud. Why would that be the first place you go? Do you even know what studying is?

Oh, and lastly, don’t look at me as if my laughter is disrupting your work time. Unless you’re studying to become a Starbucks employee, I have the right to make as much noise as I want. I can’t help it if I’m super hilarious and everyone’s laughing at my jokes (including me). 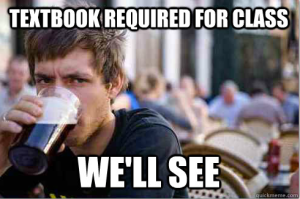 When I was in school, I didn’t try as hard as I could have. And by school, I mean high school – university. I never took anything super seriously, unless I was really interested in it. I picked my major by determining it was the subject that I hated the least. I liked the idea of school–getting ready, going to class, interacting with teachers and students, etc. But when it came down to the work, like most people, I hated it.

It’s weird looking back because I think, “Oh, if I was in school now, I would be so enthusiastic and give everything my all.” But would I? I think I said the same thing most years before school started. “Okay I’m ready for a fresh start.” Sooner or later my fresh start would become rotten.

Imagine going back to school having all of the knowledge that you’ve have accumulated since then. Easily Harvard material.

I think its hilarious when students write their papers the night before and get top marks. Only because I’ve done this. It’s the ultimate best when teachers warn you to start the project or essay months before and say that you’ll fail otherwise. Challenge accepted. Most of my teachers told our class that if we used wikipedia they would be able to tell, and it would be wrong. Welp, I used wikipedia in almost every paper, and guess what? They couldn’t tell, and I was right. Sign of brilliance.

The only reason I have studying on the brain is because Paul has to take about 5 conversion tests for his degree. Because we got our degrees in England, he has to convert his to the Canadian system. Whereas I don’t because I’m great. I feel bad though because he’s been studying so hard and I’ve been laying around watching Kourtney and Kim Take New York. Don’t judge me. Or do. 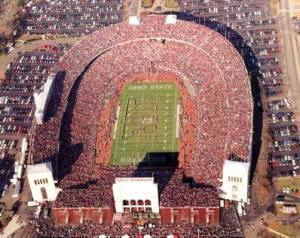 It’s difficult to have school pride when your school looks gross. University of Victoria is rated #2 in comprehensive schools in the country. That is pretty impressive. Although there are only 20 universities in Canada…soooooooooo yeah.

Paul is a UVic alum and he has kindly driven me through the campus which is tucked away from the city and has lots of greenery. Chic. One of the characteristics that was specific to the school was that there were a crazy amount of bunnies around campus. I guess the bunnies became a problem and people wanted to exterminate them. Instead, officials decided to make the humane choice and relocate them to Texas or something. Normal. They were the only draw to the school in my eyes.

Its crazy that Canada only has about 20 schools in their entire country when the US has about 20 per state. As a side note, I just want to mention that one of the Canadian schools is called Nipissing. Yep.One would think that because they have less schools here, Canada would have more students per school making their universities have an increased amount of income. I’m pretty sure this is not the case. If it is, they are definitely not showing it.

Lets just say that my high school’s football field is better quality than UVic’s sorry excuse for a stadium. Seriously what is this? Why is this allowed for college level activities? Poor future Canadian scholars. They have nothing to make their studying worth while. They have to continue looking out toward their crappy field and realize this is as good as it gets.

Also they have several totem poles on campus. 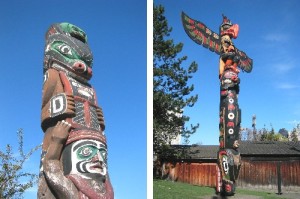