I’m not talking about the bad movie with Keanu Reeves. I actually never saw the movie Lake House, but I just know it’s bad because Keanu Reeves is in it. The one thing that I’ve always wanted in life was a lake house. I don’t even like swimming in lakes that much. I just like the idea of them I guess.

My grandpa had a lake house when I was younger. Actually, he had a few different ones. Most of them were on Candlewood Lake in Connecticut. For maybe 4  summers of my youth we drove to these lake houses and just chilled with my family. Being right on the lake is the best. One of his houses had a docked slide in the middle of the water that my brother, my uncle, and I liked to go on. I think my cousin did too, but she was younger so I’m not sure about that one. Anyway, I remembering having to fill up this milk jug with lake water and pouring it down the slide in order to make it slippery. Even back then I knew this system was archaic.

I also liked going tubing. I can’t water ski. Well, maybe I can. I’ve never tried. Paul and his bro were like pro water skiers when they were younger. Well, pro Canadian water skiers. So I guess they were just regular? (JK GUYS) I can’t help but to be afraid that a shark is going to eat me whilst I’m tubing. Especially when I’m stopped in the middle of the lake. I know sharks don’t reside in lakes. I’ve seen every shark movie wayyy to many times to think that I’m ever safe in a body of water. Even in pools you have to keep a look out. I’m just sayin’.

Paul has had a lake house for most of his life. I can’t help being jealous of this. It must have been so much fun to have an alternate house to go to for the entire summer. I guess what I like most about lake houses is the simplicity of everything. You don’t need a lot of stuff to have fun at a lake house. You just need a lake and a barbeque.

I think going to my grandpa’s lake house gave me a sense of having a big family. There was always someone to hang out with or talk to. My family isn’t particularly big. I have one sibling. And 3 cousins. I’ve met two of those cousins only once in my life. But they live in Minnesota. So it’s really their fault for living in such an undesirable place.

A lot of things have changed since those lake house days. Some of my family members don’t talk to each other, that uncle isn’t my uncle any more, and there’s no longer a lake house to go to. But now that we live about 45 minutes from my husband’s lake house, I feel like I can make new lake house memories. Plus, that might be the only place I can get a decent tan here, so I really don’t have a choice. 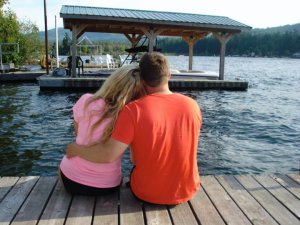