I seemed to overlook Ja’mie in past GCOTW posts. This could possibly be due to the fact that she’s my girl crush of my life forever and ever, so clearly limiting her to the title of a weekly crush is very wrong. But I’m doing it anyway because it’s my blog and I do what I want. Also, I had trouble concentrating because my friend Tracie keeps begging to be my girl crush. She’s been taking really provocative facebook photos in hopes of impressing me, but I’m not going to give into her games. You can’t just ask to be honored on my blog. What a freak.

How do I explain Ja’mie King? Well, she’s a private school girl who tries extremely hard to be the best at everything. She takes high school extremely seriously and is constantly looking for ways to make herself stand out from her fellow pupils. She’s sponsored around 85 African children in her lifetime, does many extra curricular activities, and tries to look out for her fellow classmates. Oh, by the way, Ja’mie is a character from Chris Lilley’s Australian TV shows We Can Be Heroes and Summer Heights High. Mr. Lilley thought up Ja’mie as well as many other characters featured in the shows that I mentioned above.  He also made a series called Angry Boys which covers an all-male cast of characters. 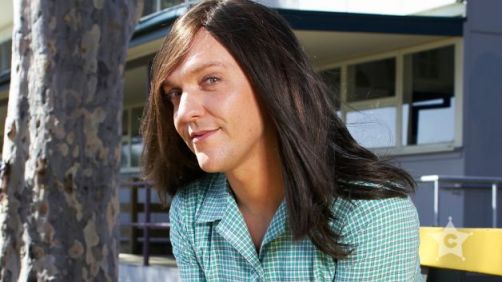 I’m also in love with Chris Lilley mainly because if we got married, my name would be Lily Lilley. So there’s that too.

The reason why Ja’mie is the perfect pick for this week is because news has recently surfaced of a new Chris Lilley production that only focuses on Ja’mie King called Ja’mie: Private School Girl. You could say that I’m pretty excited. Let me introduce to you a gal who needs no introduction:

I think the reason that I love Ja’mie is because she’s not afraid to be herself and offend people. She’s confident, bossy, funny, and gets what she wants. I think more girls should have the chutzpah that Ja’mie has. If you’re someone who gets the impression that Ja’mie is a bitch, it’s probably because you’re just jealous.

Don’t get me wrong, there are sides to Ja’mie that aren’t attractive. She’s abusive to her mother, she often uses fund raisers to raise money for her own interests, and she can be outwardly mean to people she calls her friends. That being said, I think she’s a very real and amazing character that has a lot of growing up to do even though she’s practically perfect already.

What a manly sport.

I wish that I was making this up. Yesterday I was on my computer while Paul was looking at the different sports that were on  TV. I looked up from all of the super important stuff that I was doing and I glanced at the screen. I read Football, Soccer, Rugby, Soccer, Lumberjack Competition, Soccer. What. What. What is that.

We turned it on for a bit. Its basically Canadians, Australians and Kiwis putting nicks in wooden poles, inserting a plank into the groove they created, standing on the inserted plank, and repeating the process. As J’amie King would say, “It’s so random!” If you don’t know who that is, I suggest you watch Summer Heights High RIGHT NOW.

Ahhh this one has some quality background music.

In conclusion, the Lumberjack Competitish is a smart idea. I think it’s a great way to celebrate Canada’s roots and heritage. They should be proud of the one skill that they have been blessed with. As for the Australians and Kiwis–You’re better than that.