Barbies are a symbol of perfection. Something that every little girl wants to grow up to be, and nothing that they will ever look like in a million years. The Barbie company (Is it Mattel? Do I care?) has many collections where they feature different clothes for Barbies, but they never give them different faces. What’s up with that? They change her skin color, but never her facial features. Can’t one have a lazy eye, or super flared nostrils or something? The reason we gave our Barbies bad haircuts was to balance out their beauty. You can’t have a good body, nice clothes, a solid career, a pretty face, AND perfect hair. Impossible. 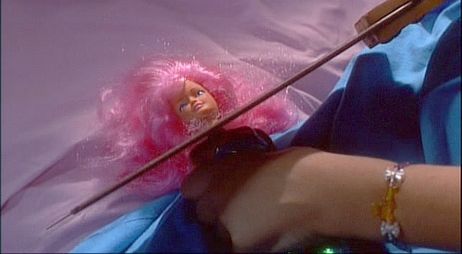 For some reason, the people at Mattel think they know what women around the world look like. Their Dolls of the World collection highlights the cultural differences of women around the world. The dolls are dressed in costumes that showcase each nation’s traditional garb. This collection has been ongoing since the late 80’s. They come out with maybe one or two new national Barbies a year. (I kind of made that up. I have no idea what I’m talking about.)

Some examples of these beautiful creatures are:

Scotland Barbie. She looks like a typical lass. As you can tell, she can rock a ton of plaid. It’s kind of depressing that the makers chose to give her an oboe/clarinet/lame instrument instead of bagpipes. Also, she depicts the accurate amount of makeup that Scottish girls wear.

Spanish Barbie. This lovely lady is dressed in the beautiful clothes of a flamenco dancer/Satan. Her narrowed eyebrows show how women from Spain look when they judge other foreign women.

Dutch Barbie. It’s nice that Mattel decided to go with wooden shoes (klompen) and hairbrush accessories instead of a reefer like modern day Dutch girls. As a child, she would’ve been my Barbie of choice because I was partial to Aryan looking dolls. Sorry I’m not sorry.

Greek Barbie. This is kind of misleading since there’s a picture of ancient Greek pottery on the front, you would think they would stick with that theme and dress Barbie in a toga. I have no idea what she’s wearing, but it looks like something Moroccan Barbie should be wearing. Also, this Barbie can’t be Greek since she doesn’t have a mustache. 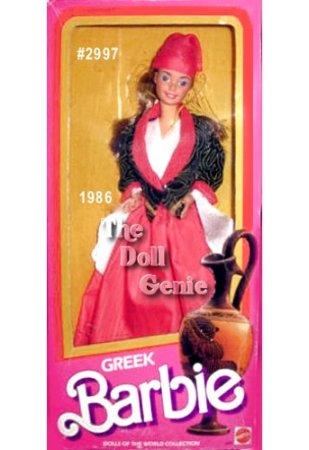 Finally, through my searches I found Canadian Barbie. Since Canada has no rich history, they simply decided to dress her in a Mountie uniform and call it a day. I don’t know how many Canadian girls can relate to being a park ranger, oh wait, yes I do. None. Also, could they not give Canadian Barbie red hair AND a red uniform? So clashy. They should’ve made her a fur trapper and trader. Or Avril Lavigne.