For some reason the color gold as been present in my life a lot recently. So I figured I should make a tribute to some of my favorite golden things. Because honestly, what else do I really have to do?

Let’s start with gold makeup. I wear gold eyeshadow almost every time I wear makeup. The gold tends to really make my blue eyes pop. Or at least that’s what I tell myself. There’s a little beauty secret from me to you. I’m also a big fan of gold nail polish. For my 23rd birthday my mom sent me a couple of goodies in the mail and one of them was Chanel’s Gold Lamé nail polish. I know it’s pronounced la-may, but do you think that stops me from referring to it as Gold Lame? 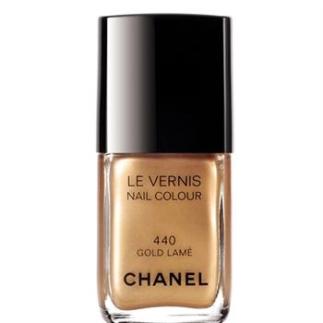 Look how lame it is!

I’d have to say that one of my favorite childhood movie moments revolves around something gold as well. Remember how Veruca Salt wanted a goose that laid golden eggs in Willy Wonka and the Chocolate Factory? That whole scene was so perfect. Veruca’s prepubescent body, her dad, those huge spray painted eggs, etc. I love when she makes a mess of that room. I was always horrified as a child by that. Thinking, man if I did that my mom would kill me. I remember a while ago when I was asking my dad for something and I said, “But I want it!” and my brother was like, “Alright Veruca.” I did some life re-evaluating after that comment. Side note: you know what’s terrifying? Looking up the cast of Willy Wonka and seeing what they look like now. So depressing.

Hmm let’s see…what else? Oh, there was the gold bracelet that my grandpa got me with my name engraved on it. Except my name was spelled wrong. Minor detail.

One of my husband’s favorite places to eat is Golden Corral. I don’t know if you’ve ever had the pleasure of visiting a Golden Corral, but it’s definitely sight for sore eyes. I wouldn’t be surprised if people actually strapped on feed bags and just ate for hours. If you like cheap buffets, you should definitely visit a GC. There was one that was opening by my grandma’s house and when it was still under construction the only letters you could see were “Golden Corr” or something of the like. My grandma was like, “Did you see that they’re building a Golden Carrot by me?”

Remember in the Olympics when the USA got the most gold medals and all the other countries were just dumb? Even though most of the people that got us our gold medals were so gross (Michael Phelps).

I’m having a lot of trouble choosing which song to display because I have three in mind: Band of Gold by Freda Payne, Golden Years by David Bowie, or Sister Golden Hair by America. I’m not the biggest fan of America. They’re too groovy. But I do like that song a lot. And I used to have golden hair. Band of Gold is good but it’s kind of depressing and I looked up a video of Freda Payne “singing” it on Soul Train and she looks like she doesn’t know the words. Okay, I don’t even know why I had to talk myself through this one. David Bowie is obviously the best. Does anyone remember in A Knight’s Tale where they dance to Golden Years? Nope? Just me? Okay. RIP Heath.