After watching the Super Bowl Half Time show, I have to say that I’ve had enough of Madonna. I mean, I had had enough of her before then, but now I’ve really had enough.

First of all, I don’t know what the big deal is about Madonna. She had a handful of hits in the 80’s and people think she’s like a music icon. It’s hard for me to decide which version of Madonna is most disturbing–80’s Madonna, the Madonna of today, or the Madonna that made out with Britney Spears.

Madonna’s daughter Lourdes will live in her mother’s enormous shadow for the rest of her life and will most likely become a lesbian. Kind of like what Dina Lohan did to Lindsay, and what Cher did to Chaz (well, kinda). I guess Madonna has other children, but lets face it, no one cares about them because they didn’t sport a uni-brow for years like Lourdes did. I could go on about Lourdes for hours (Her nickname is Lola because she probably hates her real name. Can you blame her? Her fashion line “Material Girl” is named after one of her mom’s songs and I’m pretty sure Lourdes had no say in anything. Shame.) but I won’t.

Madonna needs to stop flashing her crotch everywhere. I mean, after you hit 40, it’s time to put the crotch away. People don’t like to think about middle-aged people even having crotches. *shudder* Never mind whipping it out all the time. 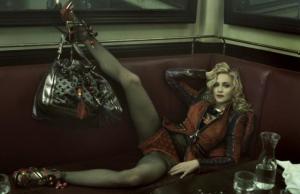 Madonna: What if I pose like this? Louis Vuitton: Ummm okay...

How many body suits do you own?!?

The Super Bowl Half Time show was pretty lame. No wardrobe malfunctions, no lip-sinking slip ups, no falling on her face. The dancing was pretty bad too. For some reason there was a Roman theme going on. It was just confusing. At the end, there were lights that spelled out “World Peace” that made me burst into laughter. Oh Madonna, you silly goose.

The main reason that Madonna bothers me is because of this:

How does anyone “loathe” hydrangeas? Sorry you have fans that want to give you flowers. That must be rough. Also, is it just me, or does Madonna think she’s British? Wait…isn’t she from Michigan? Yep, okay just checking.

Take your gap-toothed smile and hit the road.