Okay, so I don’t actually have an addiction per se, but I am interested in some strange stuff.  You see, it all started because I’m a picker.

No, not a nose picker. Well, at one point I think we were all nose pickers. It’s like a cave of wonders in there. I’m a picker in the sense that I can’t leave things alone. If I have a scrape or a scab, consider it picked and prodded at all angles. Hangnails? Ripped off. Dead skin? Pshh gone in seconds. Pimples? Well, I wasn’t blessed with pimples to keep me occupied. Other people’s pimples? Poked, squeezed, and extracted thanks to moi. I don’t even see earwax on my Q-tips any more because I use them that often.

The thing is, I’m not addicted to any of those things. They just, entertain me and keep me busy. There was one day when I was all out of things to pick. Nothing left. So I went on YouTube and watched a video compilation of people popping pimples. I WATCHED STRANGERS POP ZITS. I love seeing puss being drained out. I don’t know why. You can stop reading now, if you’re getting grossed out. For some reason this all makes sense in my brain, but when it’s written out, it’s actually really weird. 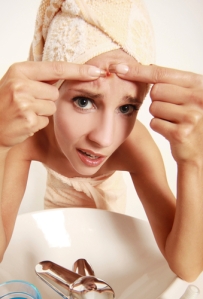 Come here, troubled soul. I’ll get that for you.

The pimple videos were great and everything, but I started to get bored of them. So I found something new and more exciting. Bot fly removal. You need to hear a little background story before you truly understand what going on.

In South America, bot flies lay their eggs on mosquitoes because they’re too big to get close enough to hosts. The mosquitoes sting the hosts and the eggs fall off onto the host and, because of the body temperature of the host, the eggs hatch and the larvae burrow into the host’s flesh.

Just for the record, if science class was like this, I would’ve received an A+++.

The larvae grow and grow until they need to be extracted from the skin. You can’t pull them out easily though. They have teeth that hook them into your flesh. You have to put tape over their breathing hole and then they’ll come up for air. That’s the magic moment when you pull them out.

Here’s a video saying exactly what I just said, but better. Also, I don’t know why it says “sex maniacs” on it. Are bot flies sex maniacs?

It’s pretty exciting. I would be lying if I said I haven’t watched every human bot fly removal video on YouTube. I won’t watch them be removed from animals though. Even I have standards.

Also, if you’re looking to watch other extractions that aren’t as gruesome, may I suggest teeth being pulled? The one on Green Day’s Geek Stink Breath music video is a good one. Very rewarding at the end.

What have we learned? Don’t ever ever ever go to South America. And Lily is super gross.