Okay, that’s a little dramatic. I’m not saving the world. But I’m definitely saving Victoria’s ass big time. I’ve already helped people in need thrice this week. Do I need to purchase a cape or what? 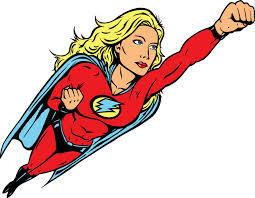 A couple of days ago I was shopping in Walmart (gross, I know). I chose an express line and the old man in front of me kept turning around and staring at me. Assuming it was just another Walmart psycho, I chose to ignore him and put my sausages, peppers, carrots, and hummus (the essentials) on the conveyor belt.

When the guy in front of me turned around to face the cashier, I noticed that he had a packet of cheese in his back pocket. Like, an $8 block of cheese. He was completely rung up and about to pay when I tapped him on the shoulder and said “Don’t forget the cheese in your pocket!” He reached back, laughed and pulled it out and paid for it.

Afterwards the cashier was about to kiss my feet or something, she was so grateful. The best part was when I reached down to grab my groceries, I saw that the man in front of me forgot his other bag to which the cashier said, “Karma!” He must have been very flustered.

*There was originally part of me that thought he might have forgotten the cheese and wasn’t trying to steal it but then I realized, who would put cheese into their back pocket instead of into their cart with the rest of their food? I also thought he was going to beat me up in the parking lot or follow me home so I laced my keys between my finger and took a weird route home. The things I do in order to stop thievery.

The next day I was walking downtown when two Asian tourists flagged me down. They were holding their luggage and looking super confused. They had a map with their hotel circled on it and asked if I knew where it was in broken English. I said yes, and gave them directions but since I was walking that way anyway, I told them to follow me and I would take them there.

I had a little chat with them and found out they were coming from California and just visiting for pleasure. They said the city was very beautiful (even though it was a little cloudy) which was cute. All in all they were super grateful that I was able to guide them to their destination. Just doing my civic duty.

On the same day, as I was walking home, a biker stopped and asked me for directions and I pointed him in the right way. Not a super big deal, but if it wasn’t for me he probably would’ve gotten lost and died. So what I’m trying to say is that Victoria needs to erect a statue of me pronto.

I think it’s obvious by now that I like to go on trips and see places that I’ve never been to before.  In 2009 my mom and I wanted to go on spring break somewhere besides our go-to spot in Orlando. So we chose Bermuda.

It was easier for both of us to just meet there instead of me flying home ( I was in England at the time). It was nice because the location of Bermuda was right in the middle. Just kidding. I looked at a map just now and its not in the middle at all. It’s much closer to the US. And its along the same line as South Carolina. And on the other side of the pond, it would be level with Morocco.

Flying there, I was super paranoid that something bad would happen as we entered the Bermuda Triangle. This old lady on the plane next to me said that she went there 3 times a year and survived every time so I figured everything would be alright. God wouldn’t let that lady survive all those times and let me die on my first visit, right?

I survived and met my mom at our hotel. The rooms were separated into little villa-type things. Ours was called The Sea Grape. I didn’t even know sea grapes were a real thing, but apparently they are. One memorable aspect of Bermuda was that there were tons of cats. We had a regular cat that would stop by our room every night, eat some of my shrimp cocktail, and then sit on my bed. One night we had at least four cats outside our place. 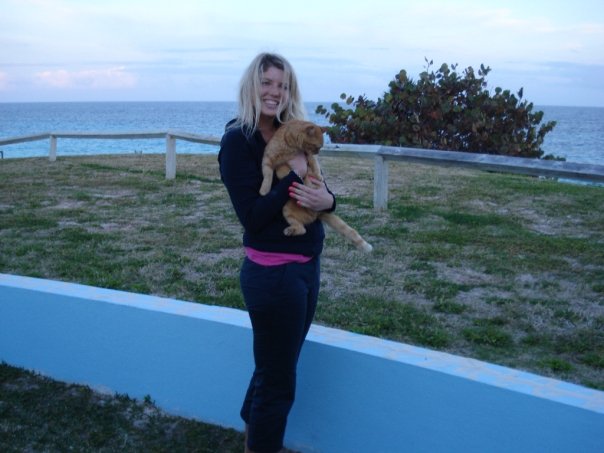 Ignore my hair and my body and everything else in this picture besides the cat.

The weather was nice and sunny while we were there but it wasn’t as warm as we had been expecting. It was kind of a let down. Leave it to me to complain about a vacation.

We went into the main drag in town and that was fun because we felt like locals. Or at least I did. The capital of Bermuda is Hamilton which is also the name that I gave one of the cats that decided to live with us.

Bermuda is kind of like Canada in that they have their own currency but they’ll accept US bills as well. They’ll just take whatever they can get, really. Which I respect. That’s what I would do.

My very beachy all black apparel.

While we were there we went to the Crystal Caves which were just Carlsbad Cavern-esque caves with stalactites and stalagmites. I’ve seen both many times and I still can’t tell the difference. I remember our tour guide being slightly in love with me though. But really, who isn’t?

Then we went back to our place and decided that Bermuda was kind of lame and didn’t have that much to do so we booked a flight to Orlando. Seriously.