Let’s just pretend that I do a “Girl Crush of the Week” post weekly and that this isn’t the first time, okay? If you don’t know who Olivia Palermo is, you probably aren’t a New York socialite, never watched The City, and don’t have a Tumblr. Let me be the first to advise you on seriously rethinking your life.

Olivia Palermo gained social status by starring in the reality TV series The City alongside young fashion hopeful Whitney Port. Whitney was originally on The Hills as a friend of Lauren Conrad, but moved on to bigger and better things. Olivia was kind of like Whitney’s frienemy and showed her the ropes of the fashion world in NYC but still making sure that Whitney was somewhat beneath her. I never said my girl crush was nice, okay?

Since then, every time I see a picture of this girl, she looks perfect. She knows style. Every look she wears seems effortlessly chic, like putting outfits together is second nature and money grows on trees. The girl can dress, is what I’m trying to say. I have a feeling that Kate Middleton wants to be Olivia Palermo, but is too restricted by modest royal garb and cries every night about having to re-use outfits to seem like “the people’s princess.” The people want fashion statements, Kate. If I have to see you in that green jacket one more time I swear… 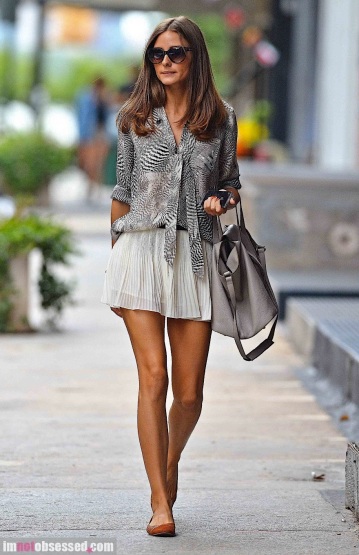 Anyway, Olivia has done a couple note-worthy things with her time besides walking around the streets of New York hoping that someone takes her picture, but I don’t feel like looking up the details on Wikipedia. I think she got signed to Wilhelmina modeling agency but I’m pretty sure she doesn’t model any more.

When I was thumbing through one of my mags recently, I saw her in an ad accompanied with Masai tribesmen in traditional dress, all looking super chic. Basically, this Spanish footwear brand, Pikolinos (a non profit company), are sending their leather and beads to the Masai people to help better their lives and sustain the development of their endangered tribe. In turn, these Kenyan women are producing beautiful, handmade designs and earning money for their children’s schooling, livestock, clothes, etc. 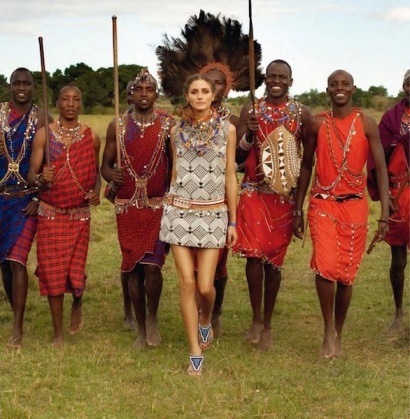 So that’s cool right? Olivia is the ambassador for the charity project so that basically means she gets a free trip to Kenya to oversee the project and gets to model the footwear. Fair.

Who’s your girl crush at the moment?

While I was sitting on the couch yesterday stuffing envelopes for my friend’s job (BECAUSE I’M SUCH A GOOD PAL/have absolutely nothing to do all day) I decided to watch Canada’s E! channel.

At home (Chicagoland) I’m what you would refer to as an “E! enthusiast.” I know every show on that channel and have seen every episode of those shows at least 5 times. It gets to the point where I have memorized episodes and mouth what everyone on the show is saying. Its a gift.

Well, Canadian E! is a little different from the E! I know and love. They still play stuff from the regular E! channel, but they have Canadian stuff mixed in too. Most of it is backstage at fashion shows (which is awesome) but they also have a lot of coverage of celebs who are in Canada– basically no one except the Biebs, really.

The other day they had coverage from Toronto Fashion Week. It seemed like an oxymoron to me. I know I have said this before, but I do not find Canada stylish in the least. Only because no one makes an effort. And because everyone’s Canadian.  I was kind of surprised that top designers were willing to have their designs on parade in Canada. Who would buy them? Unless they were offering a 2012 spring line of yoga pants, I doubt anyone here would be interested. But I suppose different cities have different styles. Maybe Toronto is super chic and I’m missing out on all the fun over here on the west coast. I doubt it though.

One woman that they interviewed (I didn’t get her name…because I didn’t care) said something along the lines of, “Yeah it’s great here in Toronto. The tents look just like ones in Mexico City Fashion Week–where I just came from.” Ummmm Toronto, you need to step it up a notch if you look the same as Mexico City’s Fash Week. I didn’t even know Mexico City was allowed to have one.

Also, speaking of fashion week–this is very unrelated, but its basically my favorite thing right now.