It’s a challenge for me to watch one of my country’s favorite pastimes from a lesser, more embarrassing location. And the pastime I’m referring to is the judgement of people who’ve achieved thespian greatness. Attacking people from the privacy of your own home is the true winter sport. Sorry Sochi winners. Combine it with live tweeting and I’d consider you an athlete.

I couldn’t help noticing that my country was calling out to me through Oscar ensembles. So much red, white, and blue! Granted, they could have been calling out to people from France, The United Kingdom, Russia, Norway, Australia, Cambodia, Chile, Costa Rica, Cuba, Czech Republic, Iceland, Laos, etc, etc, etc. But I just have a strong feeling that they were trying to signal me.

Jennifer Lawrence really stepped out of her comfort zone by choosing another Dior gown to sport at the Oscars. This one was pleasant, but doesn’t hold a flame to her dress last year. However, she did manage to trip in both of them. Is it just me, or are her falls a cry for even more attention?

Pink’s ruby slipper dress was so unexpected and glorious. I think everyone was assuming she would enter swinging from the chandeliers, wearing a leotard, but she classed it up big time. Also, who knew she could sing like that?

Jared Leto is sporting a cute little crimson bow tie with his white tuxedo jacket. I was unsure about this combination, but I realized that if he chose to wear something normal, it would feel seriously wrong. Paired with his ombre beach waves, Jared managed to glam it up without being too strange.

Matthew McConaughney also decided to wear a white jacket on the red carpet which made him resemble a cute little busboy. I feel like Matthew and Jared made a pact to both wear white, hoping to please the Oscar gods. Luckily for them, it worked.

Kate Hudson really stole the show in her Atelier Versace gown. Like, stop. This dress is gorge. I mean, she hasn’t even done anything worth mentioning in the past 5-10 years but the girl knows how to dress.

I have to give some honorable mentions to Naomi Watts and Maria Menounos. They both wore chic white gowns that didn’t ask for too much attention, but were simply beautiful. Also, Maria Menounos shouldn’t even be there, but props on the dress.

Lupita Nyong’o’s ice blue ethereal number really did it for me. It’s possible that she won an award for that dress alone. She also had such a beautiful and eloquent acceptance speech–I’m certain she was inspired by her frock. Lupita is most definitely America/Kenya’s sweetheart.

Jason Sudeikis wore a blue tux on this big day, which I applaud because I’m a fan of navy. However, I unapplaud because of the black bow tie. I just have trouble with navy and black mixing. Sorry, I’m not sorry. 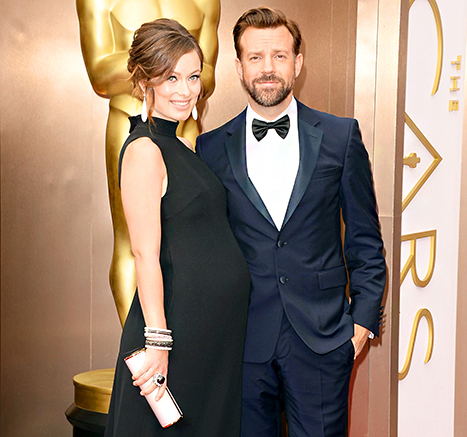 Sandra Bullock’s Alexander McQueen dress looked terrible during the televised interview I tuned into. However, the photos online make it look pretty damn good. I also thought her hair was delightful.

I have to applaud Amy Adams’ dress solely for the fact that didn’t show her side boob. Congrats on figuring out how to flatter your body, Amy. 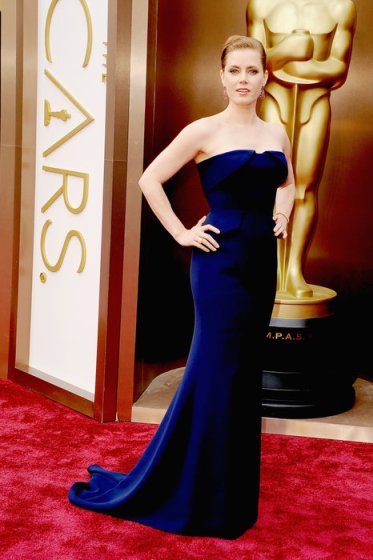 I think my favorite dresses of the night were Charlize Theron’s, Kate Hudson’s, and Lupita Nyong’o’s. Did you watch the Academy Awards? Which outfits did you like?

I don’t know about you, but I love back-to-school shopping. I realize that school has already started and that I’m not even a student, but I still like having a reason to buy a new wardrobe and writing utensils. I’ve never been a huge backpack gal. I’ve always just carried my books in my arms (or just left my books in my locker because lol) and carried a purse. I was also famous for leaving my purse in my classroom or letting my pens explode inside of said purses, ruining the lining.

I think the last backpack type item I had was in ’99 and it was made out of glittery, clear plastic. So fashion forward. I’m sure I paired it with a shirt from Abercrombie that said some cutesy/douchey saying on the front. My generation had some questionable moments.

Thankfully, backpacks are making a really cool comeback and redeeming themselves. And you can fit more than a pen and some Pokemon cards in them this time.

I’m really into these Hershel packs. They have great colors and patterns and sweet leather straps to class it up. They’re on the pricier side ($70-$100) but they seem like they have lasting power.

I’m not much of a skater, but I kind of have a weird love for skateboard brands. This Volcom bag is understated and classic. You could fit a lot of stuff into this size–maybe even use it for a sleepover. You guys still have sleepovers, right?

My boyfriend, Marc Jacobs (I know he’s gay but he can still be my boyfriend), designed these cute nylon backpacks for his Marc by Marc Jacobs line. Even though this is his more affordable line, they still cost a pretty penny. You would have to use a backpack a lot to make this purchase worth it. But still–just buy it because it’s cute.

I’ve always been a fan of Vans. They make great shoes. They also make great backpacks. I’m partial to this girly floral design that adds a fun pop to any outfit. I wear a lot of black, so I think a bag like this one would be a grand accessory for moi!

Have you heard of the brand Pendleton? They’re a super lush brand that was born in Portland, Oregon. One of my husband’s family friends got us a cozy Pendleton wool throw for a wedding gift. We were pretty excited. I would be really stoked to acquire one of their southwestern/Aztec-y printed backpacks. Talk about a pop of color. I could totally imagine living in an adobe hut and rocking this pack all the live long day. (wtf am I saying?) 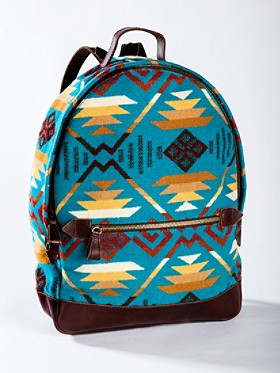 And lastly I think Element has some cute bags to offer. If you can’t tell, I’m kind of into patterns and I’m a big fan of polka dots. Element knows the way to my soul. Simplicity.

Do you like backpacks? What are some trends you’re hoping to see soon?

I’ve thought about this topic for a while now. Both stores have recently been erected in close proximity to my home. I’ve taken note that while most people have preferences about which stores they like to shop at, almost every female between the ages 15 and 40 will stop in both H&M and Forever 21. Whenever I see someone in either store below the 15 year-old end of the spectrum, I’m disturbed. But it doesn’t bother me nearly as much as seeing someone enter the store that is way beyond the 40 year-old range. Like, Talbots is just around the corner, yo. Regardless, they are popular stores and have become almost interchangeable.

Finding clothes that not only fit, but also compliment our body type is a life long struggle for most women. I have found that Forever 21’s sizes aren’t as  accommodating as H&M’s are. H&M has, by far, a better selection of sizes ranging from XS-3XL and Maternity. Forever 21 recently (within the last couple of years) added a plus size section which also goes up to a 3XL. However, not all of their stores include the separated plus size department. So for the rest of the people that shop there, they must indeed have the bodies of 21 year-olds…forever.

For most people, quality isn’t an important factor in their shopping sessions. It is for me, but that’s only because I have standards. Forever 21 likes to sport material with no give, unfinished hems, and scratchy fabric. Jus’ sayin’. To be fair, you are paying a much cheaper price than most stores when you shop at Forever 21. Bad quality = good prices = happy high schoolers. For people with a little more ca$h money, I would suggest H&M only because their clothes are slightly more expensive. Rightfully so. Of course, they aren’t of the same quality of higher end brands by any means, but they definitely feel better and look better in general. H&M offers a large selection of work-appropriate pieces, and I for one think it’s important for your office clothes to look nice. Unless you don’t work in an office. Then throw on some overalls and get to work. (Obviously jobs either require skirts and blouses or overalls. No in between.)

Your eyes are probably rolling to the back of your head for this one. Really? Organization? Yes. If a store isn’t organized, I can’t feel comfortable shopping in it. During my high school years, I remember my local Forever 21 as a disaster zone. Like, it literally looked like a bomb went off in the store. Clothes were everywhere. If you found something you liked, good luck finding your size and good luck finding anyone to help you. Now of course with their growing popularity, Forever 21 has stepped up their game. However, their dressing room floors are still as filthy as they were the day that I turned 17. Dust everywhere. And only 5 items allowed in. WTF. H&M has clean dressing rooms and extremely flattering mirrors. And more importantly, their store is organized to a tee.

This is probably the only category that Forever 21 excels in. Their variety of clothing items and accessories is vast. They just pack a lot of clothes into that building. However, their styles are mostly appropriate for the younger generations. H&M kind of breaks up their store into different sections. Like, one section for the high schoolers (meanwhile these clothes could still be worn by older folks…but they just have a younger feel about them) and another section for the more “mature” fashion conscious group. I like how it’s set up and that everything isn’t all jumbled together.

Overall, I would come to the conclusion that Forever 21, though offering a grand selection of items and tempting prices, falls short of H&M by not producing better quality clothes, various sizes, and having messy stores.

Where do you shop?

My wardrobe is pretty perfect, but it would be even better if I had these items at my disposal. There’s nothing like a good shirt that makes people giggle.

However, there’s a big difference between chic, funny shirts and annoying graphic tees that chunky high school boys wear while they play Magic: The Gathering. Hopefully you can tell the difference.

So enjoy these bad boys that I found perusing Tumblr and Pinterest.

“In Memory of When I Cared”

“Shut Up You’re Not My Real Dad” 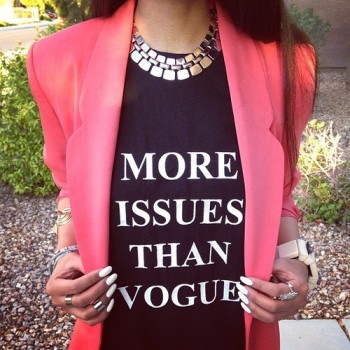 “Kill Them Without Kindness” 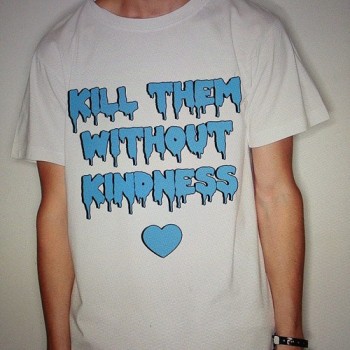 “You Had Me At I Hate That Bitch Too” 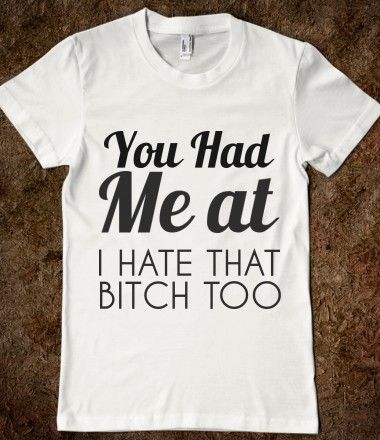